Makes Scents Natural Spa Line / What Does Cinnamon Essential Oil Do for Skin?

Nothing captures the essence of autumn like the scent of cinnamon! Who doesn’t love a nice warm chai latte on a chilly day? And, the fall season is an ideal time for reflecting on the benefits of cinnamon essential oil and what it can do for the skin and overall wellness.

So, let’s take a moment to chat about it now! 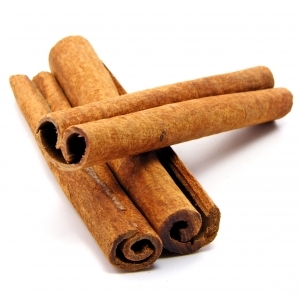 Where Does Cinnamon Essential Oil Come From?

Cinnamon oil can be extracted from the bark and the leaves of the cinnamon tree. Predominantly, the oil comes from what’s referred to as “true” cinnamon trees (the Cinnamomum verum species), also known as Ceylon cinnamon, which primarily grows in Sri Lanka and India.

Oil from cinnamon’s leaves embodies a spicy, musky scent and has a light-yellow hue. Generally, extraction happens through steam distillation of the cinnamon plant’s leaves after they’ve been dried for several days.

This oil is obtained by peeling or chipping off the bark and then distilling it with steam or carbon dioxide. Cinnamon bark oil has a darker, brownish color and a spicy, woodsy scent. It has a higher potency than cinnamon leaf oil.

Like all plants, cinnamon has compounds called terpenes that influence its scent and therapeutic characteristics.

Cinnamon also contains the phenol eugenol, which has antiseptic and analgesic properties.

Cinnamon essential oil is used in aromatherapy, topically applied to the skin (either mixed with a carrier oil or in a skincare product), and taken orally.

Beyond the skin, this aromatic essential oil offers other potential health advantages, too. 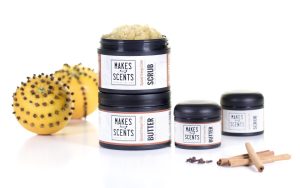 Several Makes Scents Natural Spa Line products feature cinnamon leaf oil — which has more of the antioxidant phenol eugenol in it than does cinnamon bark oil — in their ingredients.

Ready to “Spice” Up Your Fall Skincare Regimen?

When shopping for body products to keep your skin radiant and feeling its best all fall and winter long, look for those with pure essential oils and no parabens, sulfates, harsh chemicals, or artificial anything.

Also, consider the integrity of the company that makes the products, because what you buy can make a difference not only for your skin’s health but also for the planet!

Visit our online store now (free shipping on online orders over $75!), and feel free to reach out to us if you have questions about any of our products.

View all posts by Dawn Mentzer →